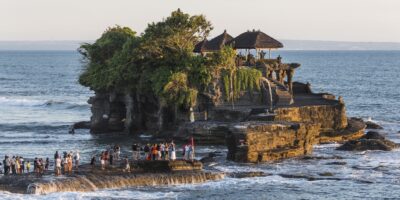 In Bali, Tanah Lot temple is known as one of the sea temples. According to local legend, each of the sea temples was to be within eyesight of the next. All of the seven temples were also made to protect the island. The shrine was built by Dang Hyang Nirartha in the 16th century during his journey through Bali’s south-west coast. There, he found a small island and decided to spend the night on it. In the next morning, the priest asked local fisherman to build a shrine on the rock dedicated to the God of the Sea.